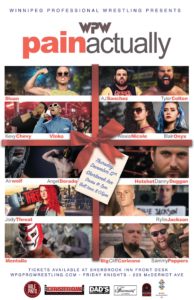 IT’S ALL ABOUT ABOUT PAIN…ACTUALLY

Celebrate the holiday season and one year of Winnipeg Pro Wrestling!

It was hate at first sight when Colton and Sanchez locked eyes at WPW’s first event SHERB YOUR ENTHUSIASM. Since then AJ Sanchez has made it his mission to demean and humiliate the Canadian Hercules any way he can. In the spirit of competition and friendship WPW management put these two in a match against IMPACT Tag Team Champions The North at WPW DON’T BE A MENACE. Unable to put his ego aside for the greater good AJ Sanchez abandoned Tyler Colton and lost their shot at the gold. This bitter feud will finally come to an end at WPW PAIN ACTUALLY, December 12th at the Shebrook Inn!

PLUS
The return of official ring announcer Joanne Rodriquez
The (drag) Queens of WPW, Lita Takeela and Prairie Sky
Sounds by Lonnie and Suraj

Tickets and T-shirts available at www.wpgprowrestling.com